Participants were recruited as Mertle’s Special Agents for 10 minute one to ones a couple of weeks ago. Responding to a conference on Narrative at the University of Greenwich, each Agent was whisked off to the shore where Mert and the stranger bonded over findings such as a mobile phone, sheep teeth, ox jaw or stones with holes. The Mission was undertaken in silence – interestingly (and awkwardly) it seemed to be a time when most wanted to talk. Fumbling over a metal detector with a sharp wind clipping the ears drove home questions: would we find anything that wasn’t a crisp packet?  Anything of cultural or monetary interest? Would it be something we both wanted? Either wanted? 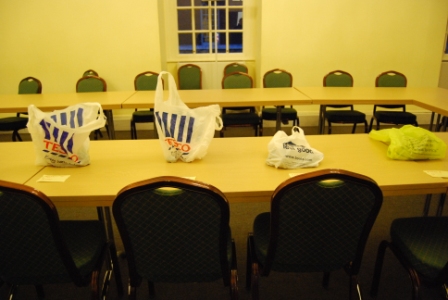 The high pitch of the detector became at times comical, at times over bearing. I spent a fortune on that instrument. It was recommended by the National Geographic, the same place that gave my last show a thumbs up. Of course it had to work. But it didn’t.

Many of the agents talked about the performance afterwards, about anecdotes, longings, or what was going to happen to the stash, though I’m not convinced anyone was too bothered about that last one. But I had a resounding memory. My Nan had instructed me to ‘keep your eyes down on the ground at all times’ when I was  younger. Not out of a need to give me a hunchback but because of any loose change on the floor.

“Find enough money” she said, “and you’ll never have to work.”

Hmm. Same old: No metal here, no pounds there, but a lot of medieval bone.

(Image shows the bags of findings labelled with each Agent’s time of Metal Detection. On display in the Edinburgh Rooms, Old Royal Naval College, photo: Agent 5). Video clips to follow.