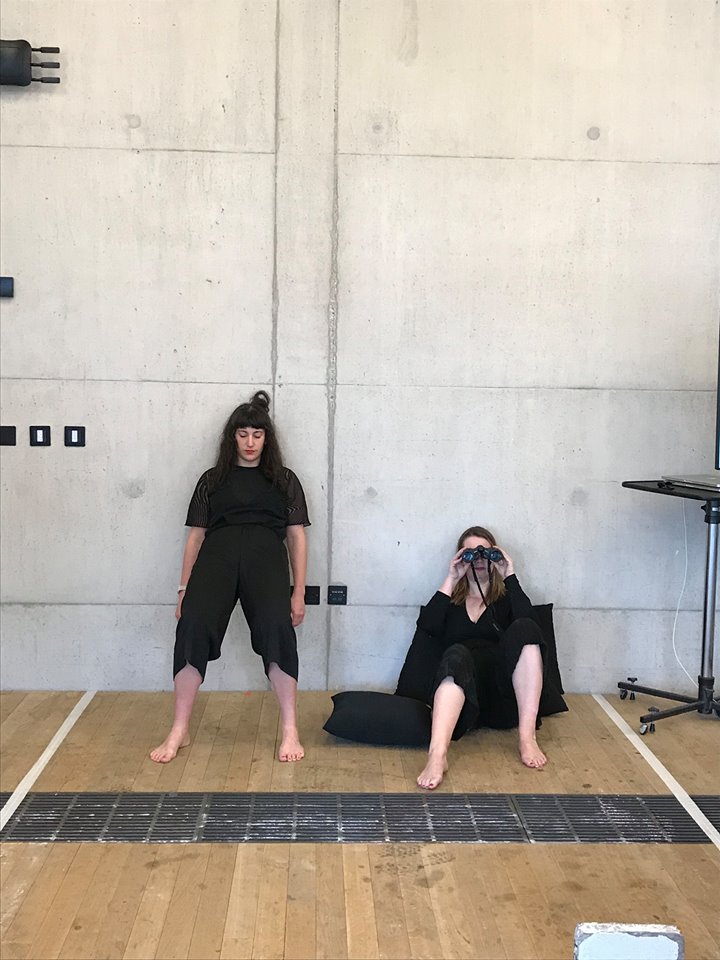 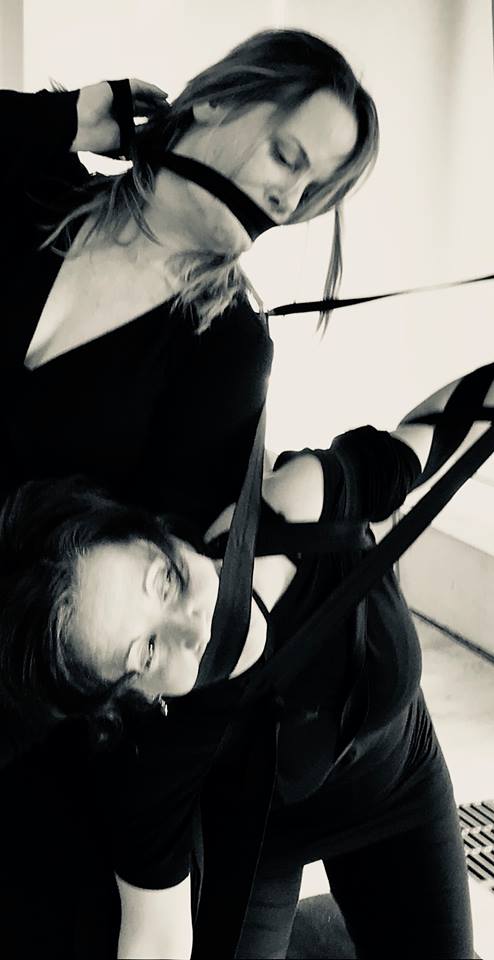 I invited dancer and movement educator Elena Molinaro (who runs a brilliant schools project at Oval House Theatre); and recent Goldsmiths grad, the installation and film artist Nastassja Simensky to improvise with me at the Tate using non speech and one prop from our practices.

We marked out two different spaces with gaffa tape for Silent Stays the Bird, a research project contextualised within the Feminist Library’s residency as a Tate Exchange Associate, which continues my explorations into the compelling and often disquieting ‘substance’ of silence.

I find non speech as a Buddhist practitioner, artist and writer multi-faceted. In feminism, broadly, it is associated with oppression. But silence can be dramatic, physical, aggressive, energetic, listless, heavy, shameful, mundane. The silent large scale theatrical dinners and café interventions that I have hosted over the last 5 years reveal that silence is constantly moving, changing, bringing forth the potential for deep listening (coined by Pauline Oliveros) or a mysterious sense of expectancy.

The projects with Elena and Nastassja fuelled different atmospheres. The work was also performative, and we invited people coming into the Tate to join us, and participate in something… and nothing.

an invitation for others to join.

This project is on-going. For more info on the Feminist Library’s activities during the day:

I am delighted that I will be joining the Barbican’s Creative Learning team, leading its academic portfolio provision, in partnership with the Guildhall School of Music and Drama.

I have left the Feminist Library as its inaugural Writer-in-Residence. I had a great, energising time, which included a period of questioning whether the Library would remain in its current premises. The lure of the unknown and the uncertain informed my large-scale project, BARDO. Arts Council-funded, BARDO is an audio walk with theatrical intervention through London’s West End exploring women’s writing, in partnership with Camden People’s Theatre. I worked with volunteers from the Library, and alongside many enthusiasts, we read, experimented and performed together. We crossed a realm, I believe: the BARDO. Its launch sold out (and, as a result, I have since run this walk from the Feminist Library each month).

I also had the opportunity to curate the Feminist Library’s activities for a Uniqlo Late at the Tate in February this year with a Writers Read Feminism series. I’m proud to write that following this effort, which exposed the Library to an audience of over 17k, the Feminist Library is now a fully fledged Tate Modern Associate and will be rolling out a programme of activities in 2018 through to 2020. I ran courses on writing and the archive, elements of which I then taught at the Library’s neighbouring college Morley, and also, East 15 at Essex University, and the Mary Ward. I met some amazing, inspiring, gutsy people.

And now… this next chapter. I am ready. Vision, energy and a new dynamic team brings creative force, fissure and fire.

Following on from BARDO, an audio walk through London’s West End exploring women’s writing, I remain intrigued by moving between the mythic and the mundane through walking.

Inspired by a silent retreat at Taraloka earlier this month, I made a series of Syllable Walks. These routine walks were devised as a predetermined number of steps: one syllable per step, then the experience written onto the page. Decision, step, page. I chose walks that were familiar: between dining room urn and kitchen fridge; bedroom and farm track; cabin and canal.

A syllable walk can be done anywhere, with the simple intention of mindfully walking a predetermined number of syllables as steps, and documenting the end point through text and image. Then standing still. Chipping away at the words.

On a path to Tara

Supported by the Arts Council of England, join the Feminist Library on a guided audio walk to rediscover London’s feminist literary history. Led by writer-in-residence Caroline Smith, the walk visits feminist landmarks both real and imagined, exploring London through the voices of a book character and a librarian at the Feminist Library. The project has seen groups walk from the Feminist Library to Camden People’s Theatre and the British Museum. An audio exploring women’s voices, a character (played by the amazing Maggie Nicols) tells of her journey through London finding lost words, and a Librarian (played by real life Feminist Library-administrator/librarian Sarah O’Mahoney) talks about women’s London. It’s set against an original soundtrack by musician Stuart Bowditch.

We wander through Waterloo, the Thames, theatre land and Bloomsbury. As the Library is moving next year, the walk is also a contemplation of what it is to move between realms, and to take up belongings and go on a journey. what is transformed? What remains? What is found? Each walk has sold out.

To find out more, and to book a walk, email admin@feministlibrary.co.uk 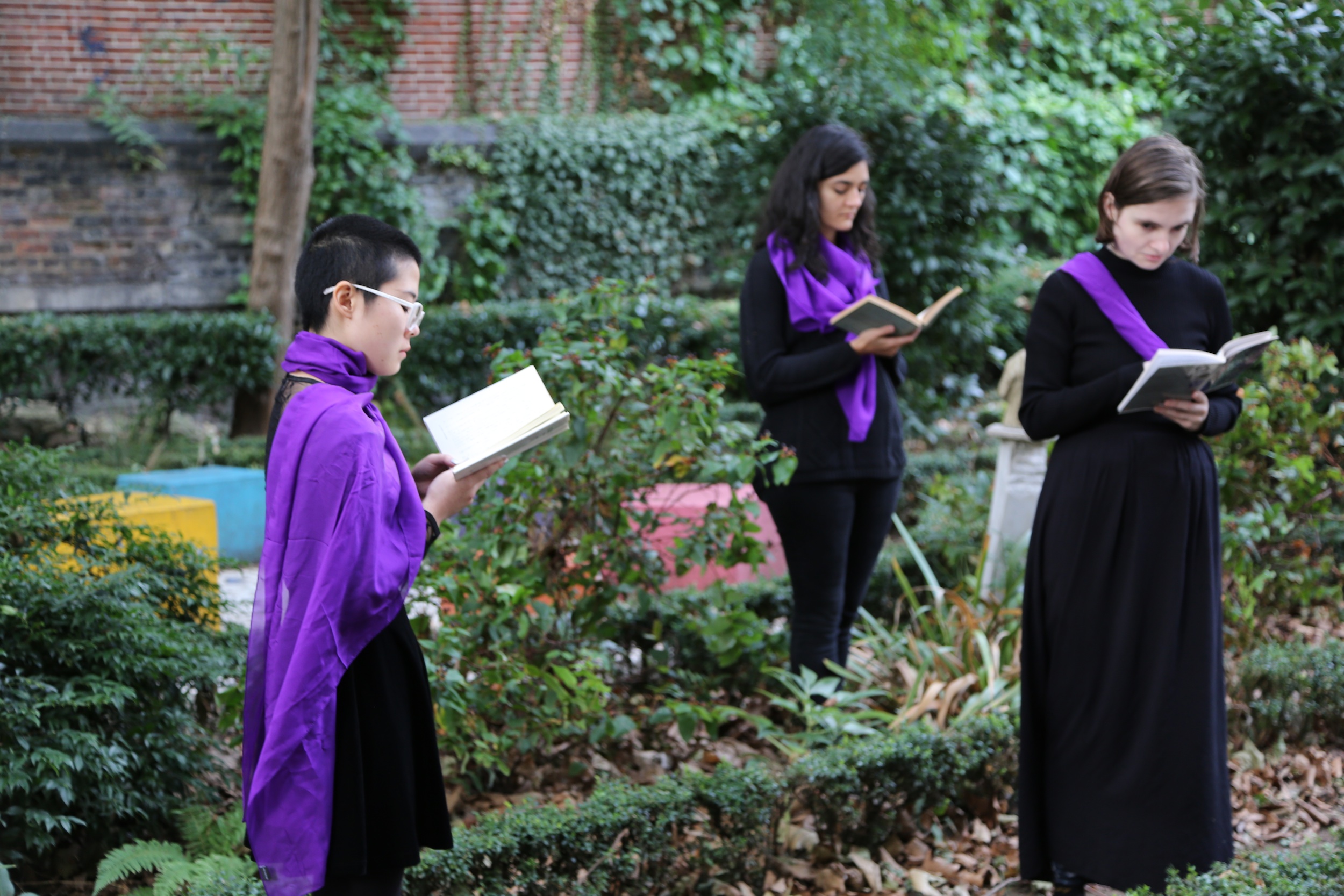 I am excited to announce new work, as Writer in Residence at the Feminist Library.

is an interconnected workshop series and art project exploring liminal space and experience through writing, meditation and site.

We invite all who identify as women, trans and gender queer to a series of four workshops with Feminist Library Writer-in-Residence Caroline Smith, to explore the imaginative realm of creative writing and meditation. Sessions start with simple asanas to aid writing with yoga teacher Kat Hymas.
Bardo is a Tibetan word depicting a realm of transition. Often it is assumed to be undesirable – not for the faint-hearted, full of uncertainty and unrest, suspended between life and death. But we will use the notion of the Bardo as a creative strategy, mirroring the precarious situation at the Library as it faces eviction; change is essential for its survival, so we will explore ways in which writing is the starting point for departure.
On October 8th, as part of Camden People’s Theatre’s feminist festival Calm Down Dear, we will perform an audio walk based on our writings, enabling the audience to experience a Bardo between the Library and the Theatre; between archive and black box.

For more info and to book workshops:
email admin@feministlibrary.co.uk with B A R D O in the subject line (sliding scale fee of £5/ £10 /£20 per session.

The WALK – programmed for Calm Down, Dear 2016 at Camden People’s Theatre

An experiential audio walk with live readings from the Feminist Library in Waterloo to Camden People’s Theatre in Euston. The walk itself last 1 hour and 10 minutes. Please wear comfortable footwear. Walkers start at the Feminist Library for refreshments at 3.15pm. We finish at approximately 5.45pm.

Any questions, please drop me or Sarah at the Feminist Library a line! I look forward to welcoming you.

The B A R D O Windows

Finnish artist Minna Haukka and I will be ‘dressing’ the windows at Camden People’s Theatre as an outpost of the Feminist Library October 3rd-9th.

We are also delighted to welcome artist Emma Thatcher to the project. 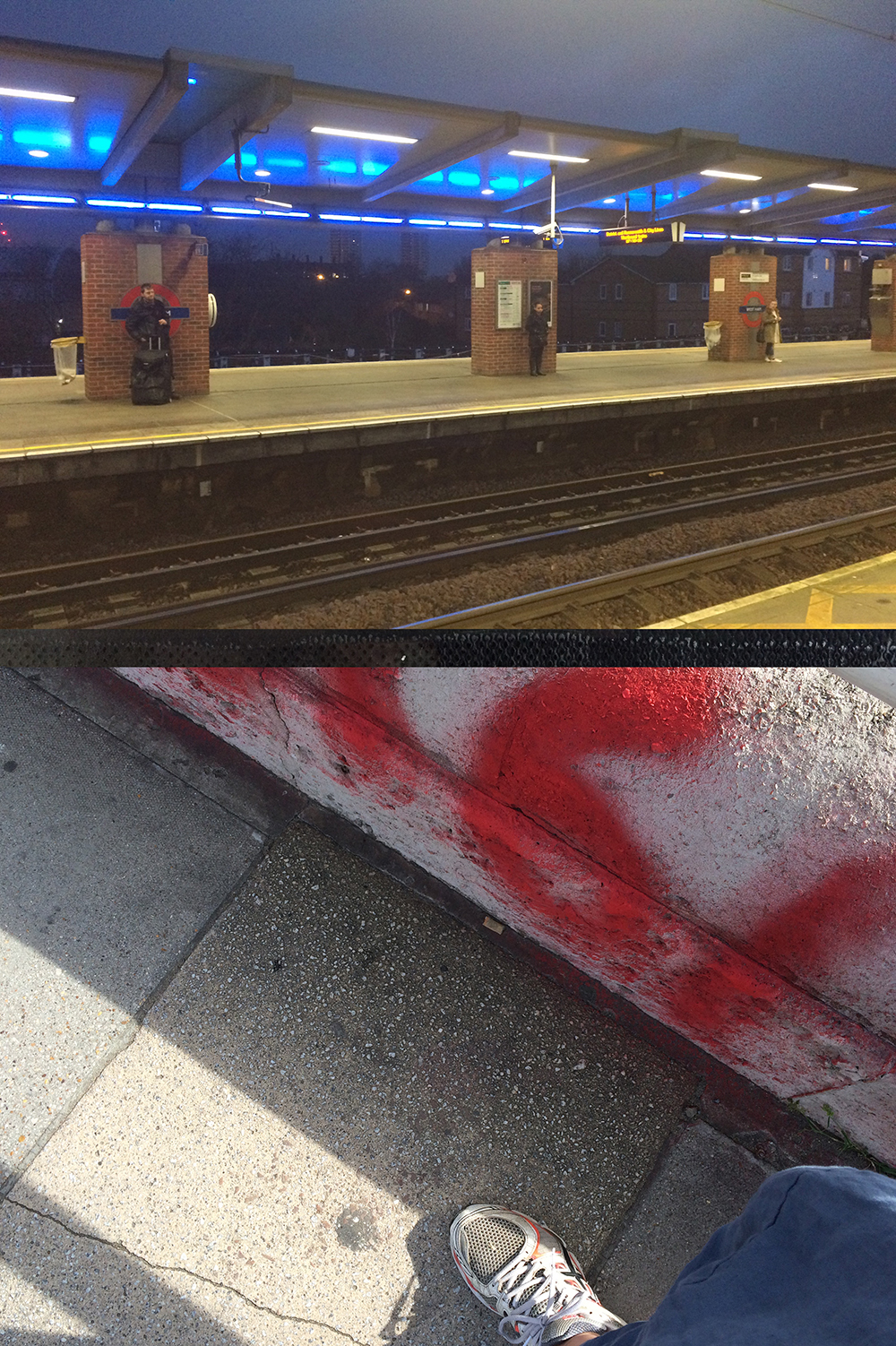